We hope that you enjoy this great resource as you continue to journey alongside of your friends!

Posted by Young Life Capernaum at 6:31 AM No comments:

Email ThisBlogThis!Share to TwitterShare to FacebookShare to Pinterest
Labels: Campaigners

I met Coop at Carolina Point when I was on the GoKarts team on summer staff. He was one of the Young Life leaders who brought campers to ride the GoKarts and we were introduced. One day during the week, I was walking alongside him on the sidewalk, and we started talking about the rest of my summer. I told him that I was going to be on summer staff again at SharpTop session 3, and he stopped in his wheelchair and said, “I’m Coop! I am one of your Summer Staff coordinators.” I was surprised because I knew one of my coordinators was some guy named Coop, but I never ever made the connection that it was him. Coop asked for my number so we could talk before our session. Towards the end of the week, Coop came to one of our summer staff meetings and shared his testimony. I’ll never forget how I felt when he told us, “I’m thankful God put me in a wheelchair.” I was shocked. I had just completed a school year that felt like the worst year of my life, full of anxiety, OCD, and depression. I had been the lowest I had ever been. The last thing I would ever imagine doing is praising the Lord for that trial, and I was still really angry about it. But hearing Coop thank the Lord for his disability really rocked my world. 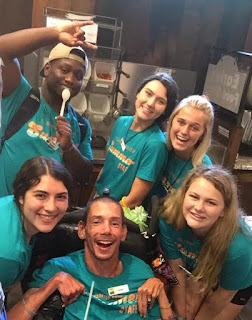 After that trip Coop and I talked on the phone before our assignment at SharpTop started. He asked about my concerns and fears. I told him I was desperately afraid of heights and how I was afraid of being on the ropes team. I really wanted to challenge myself and allow the Lord to step into that with me though. Coop told me he was afraid of people judging him for being in a wheelchair, and asked if I would help him eat, and if I would hang out with him. He cracked so many jokes, and every time he would laugh, I could not stop my face from beaming. His laugh is so darn contagious, it doesn’t matter how I feel, I always smile when he laughs. Anyway, Coop really knew we were going to be friends and was confident in that.

Like I said earlier, I came into summer staff absolutely terrified of heights. Every single day I had to stand on top of a 45 foot tower for 2-3 hours, and I was not a happy gal. During free-time Coop would bop around and visit all the summer staffers. I was on the top of the tower one of the days and he just sat down there on the ground and encouraged me. I could hear him calling my name and just telling me I could do it. I felt comfort when he was down there. Coop didn’t even need to talk or say anything, just knowing he was on the ground somewhat close to me brought me comfort. If I had it my way, he’d be on top of the tower with me every single day. Through that session Coop and I continued to grow in our friendship as we just laughed, joked around, and talked about real things. He asked me about my mom, who struggled with an addiction to alcohol, and he wasn’t afraid to ask me other questions about my life. I asked him about what it was like to be in a wheelchair and learned more about his day to day life. To me that’s how I know our friendship is true. We weren’t afraid to ask each other hard questions because we knew it was coming from a place of caring, not judgement.

God taught me a lot through summer staff. One of those things is that I'm thankful for my friendship with Coop. I learned that God has made him with wisdom, trust, and faithfulness from and in the Lord.  I learned that God did not make a single mistake when he made Coop. I learned that Coop is witty, kind, funny, understanding, thoughtful, truthful, loving, and brave. I admire him. I admire his strength, faithfulness, and heart for the Lord.
Posted by Young Life Capernaum at 5:36 PM No comments:

Together, Grace and Becca served in the laundry at SharpTop Cove this summer. It’s probably not possible to count the number of napkins, tablecloths, sheets and towels that they folded over the course of the month.

As you’ll quickly see, their friendship and personalities are were most impactful to one another and to those around them. They found laughter, silliness and joy within friendships at camp. They also found themselves resting in the simply profound truths of God. Grace is full of life and often begins her day by saying, “Let the fun begin”… may you be impacted by her joy today! 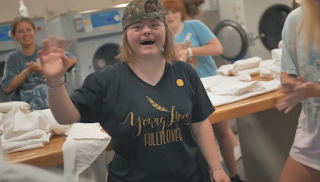 Posted by Young Life Capernaum at 12:04 PM No comments:

During club recently, Katey and her friends were talking about sin and the cross during their club talk. They created this great visual that ended up being so helpful for their friends to understand how sin effects us and how the cross offers us such a beautiful way to live instead!

They explained how God created us to live in perfect relationship with Him where we live in Him (put the “ME” box in the large “GOD” box) and where He lives in us (put the tiny “GOD” box in the medium “ME” box).

Then, take everything out.

This set up the team so well going into the scripture with their friends seeing how they were created but how sin entered in.

You could even create smaller versions for groups to break up in after the talk to discuss and re-create the visual together!

Thanks Katey and team! This is such a great way to explain such a tricky topic! Thanks for your creativity! 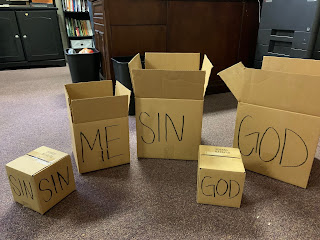 Posted by Young Life Capernaum at 9:33 AM No comments:

Email ThisBlogThis!Share to TwitterShare to FacebookShare to Pinterest
Labels: Club

On a day to day basis, you will find Young Life leaders at schools, inviting a kid to be a part of something with them. The reason behind that invitation: they have vision for that kid and that kid’s life. Whether that’s for community, for growth, for leadership or for adventure, it’s all encapsulated in experiencing life to the full with Jesus. Often, we all need an invitation that’s held up by a vision.

Please enjoy this video. I promise you; it will be some of the best six minutes of your day! It’s invitation, it’s vision and it’s legacy! It’s also counter-cultural, big, exciting and exactly where we are going as a mission! Leaders inviting their friends to be leaders; to be disciple makers who love Jesus fiercely and doing that within community.

Greenville, SC is modeling this for us, and while they are busy inviting their friends into great spaces, I think they’re inviting many of us to do something similar.

Thank you for being a part of the community that is inviting our friends with disabilities to be disciple makers who love Jesus fiercely!
Posted by Young Life Capernaum at 9:50 AM No comments:

Email ThisBlogThis!Share to TwitterShare to FacebookShare to Pinterest
Labels: Discipleship

Maggie & Abby - Jesus is telling me not to give up on my dreams!!

Maggie and Abby served in the laundry room together at SharpTop Cove this summer!

Maggie & Abby learned so much during their month and their words in this video are an incredible reminder to all of us! Maggie says, “Jesus is telling me not to give up on my dreams”!

Capernaum is dreaming big alongside of our friends and we’re soaring to new places… places that are changing all of us and allowing all of us to experience Jesus more fully! Join us! 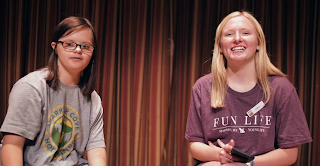 Posted by Young Life Capernaum at 12:14 PM No comments:

Posted by Young Life Capernaum at 3:05 PM No comments:

Promote Your Page Too